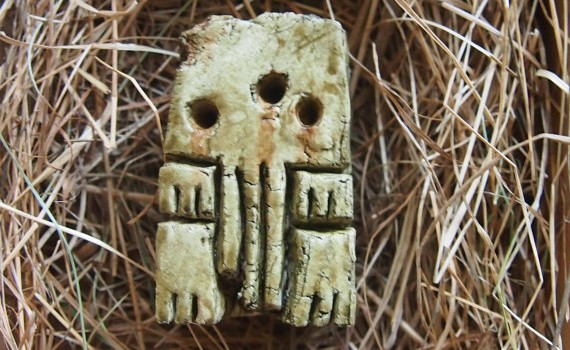 Yes, it’s time for more 40k. Decided to try a campaign, as most of us who game at my local store really enjoy more narrative-driven gaming to encourage our painting and playing. One of our players, Tony Borzok, wrote up an idea that we decided to transform into a game–the following is almost entirely his write-up, with some edits and suggestions from the wider group.

Artifacts of the Dallaran Cluster is a map-based campaign in which players battle on 15 different planets spread out through the Cluster in search of their faction-specific artifact. Along the way players will attack foes, defend territory, earn planetary perks, build fortifications, and race to acquire their artifact to enable victory. 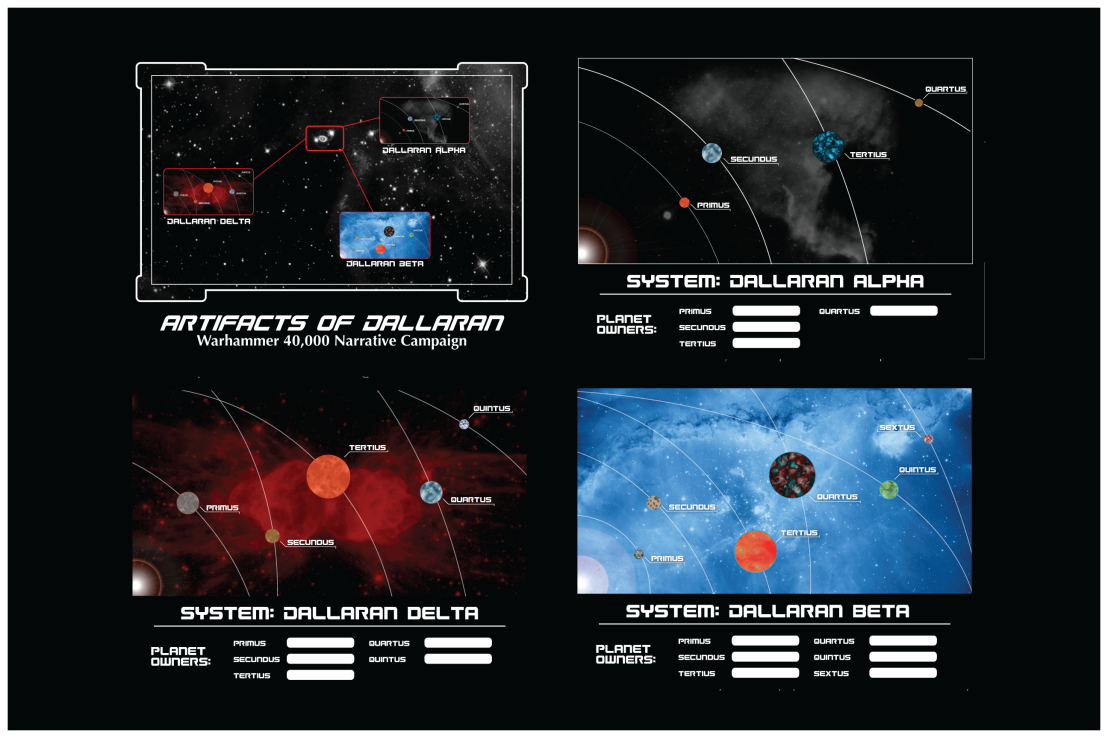 Star charts for the campaign, all custom-created by Ryan Nolte.

Prepare the Harvest, for They Will Scythe

The Veiled Region of the Segmentum Tempestus has long held mystery, shrouded in the myriad warp storms that rage and obscure Imperial travel. Yet suddenly, one area of the storms subsided–revealing a dense cluster of stars along the fringe of the sector. Imperial probes and a survey vessel were dispatched, and examination of the cluster revealed a higher number of planetoids than expected given the small size. The survey vessel’s crew launched signal buoys to cordon off the cluster while examination for heretical or xenos evidence was conducted. Naming the major star Dallaran, they completed an initial survey of it and its two companion stars, and filed the information among the millions of other reports making their way for Imperial administrative review to be opened for further exploration, colonization, and mineral extraction.

The system was largely forgotten until an Inquisitor, Jerubaal Valenhern, operating on a star base near the Dallaran cluster was called in for advice on what seemed like a routine customs arrest. A freebooter captain with a small ship attempted to avoid a customs search, and was caught trafficking illicit trinkets depicting heretical cult symbols and idols packed in strange, ill-smelling straw. 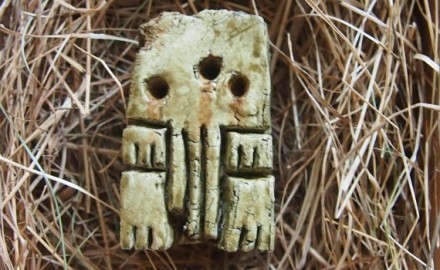 Inquisitor Valenhern carefully purged the few customs officials who observed the images themselves, then turned to interrogation of the captain: Beyal Fabian. Captain Fabian revealed under intense interrogation and psychic pressure that she had been cutting the cordon and retrieving these items from the Dallaran Cluster planetoids. She spoke of these as only the most transportable and easily moved goods, but ranted and raved about far stranger massive artifacts that she had seen. Her words began to slur and burble as she spoke of hidden temples, strange symbols, a strange creature sitting on a throne in the deep darkness, and more.

Reports are unclear from the station what followed. Inquisitor Valenhern dashed off a desperate S.O.S. message, appended with that much of the transcript of the interrogation. His plea for help was stunningly strange. He said the station was under assault from inside and that Captain Fabian was “no more”. His final words on the transmission were “Get here. There’s no helping the station. But scour the Dallaran Cluster for these artifacts. Prepare for the harvest, for They will scythe.”

Upon receiving the message, the grand Imperial war machine rumbled into action. Inquisitor Valenhern’s superior noted the potential need for extreme force, and dispatched not merely the usual Imperial expeditionary force. He earmarked it for a Titan Legion and the Adeptus Mechanicus as well. But the Inquisition was not the only one listening. What xenos awakened on the planets with Captain Fabian’s footsteps? What other races are watching the signs and stars, recognizing the portents of Chaos? And to what does the destruction of the star base and the strange words from Fabian and Valenhern mean for yet darker daemonic prophecies and quests? One thing was sure: the artifacts of the Dallaran Cluster must be found.

The Campaign will take place over a number of rounds, each of which has three phases: maneuver, battle, and wrap-up. Players start with a single planet that they choose based upon a roll-off for selection order. The three clusters of planets are Alpha, Beta, and Delta.

Maneuver Phase: Every player secretly select and write down which maneuver they will take (and the target of that maneuver). They are then revealed starting with the player with the lowest total campaign points in that round (rolling for ties). The maneuvers are as follows:

Invade: Choose a planet controlled by an opponent and battle for control. If the opponent has an HQ or Shrine in that location, that becomes the target of the invasion (requires a second invasion to conquer the world).

Explore: Choose a planet controlled by no player, and gain control of it.

Build: A player chooses one of the planets they control, and select to build either an HQ or a Shrine in that location. A player can only choose the Shrine option if they are on their correct relic planet, but an HQ can be built anywhere. Players can only have one shrine and one HQ in the system at any given time. An invasion cancels a build maneuver if it is revealed first. If revealed after in the same round, then the building is completed just in the nick of time.

If multiple players select the same destination for occupation with Explore, then they will battle with an Explore Scenario–with the winner taking control of the planet. When a player has one of their controlled planets invaded, they can choose to either battle or cede control. If they cede control, treat as an unopposed Explore for the incoming player’s forces. If they choose to battle, the winner retains/gains control of that planet. If several players choose the same destination, that’s fine–work out either sequential games or one larger multiplayer game to resolve the event, depending upon the narrative of who’s attacking where.

In initial turns of the campaign there may well be 2-3 turns worth of unopposed exploration. When the first battles occur, there may be players who do not get matched up for battles due to planetary maneuvers. If so, they can still choose to get in a battle for that segment by conducting a ship-board raid (and they have some control over opponent in that case).

Battle Phase: Should be self-explanatory, but represents the clashes between armies on the various planets. Use the following missions for guidance, depending on the situation of the battle. If the players cannot decide on a scenario that makes sense for the battle as the story progresses, consult the other players in the campaign or roll a dice.

Invasion Scenarios: Meat Grinder, Blitz, No Mercy, Secure and Control, Tactical Escalation, Deadlock. For battles targeting an HQ or Shrine, instead pick one of the following: Sabotage, Rescue, Retrieval Mission, the Relic, Cleanse and Capture, Cloak and Shadows. Note that an HQ and/or a Shrine give different bonuses to models in these battles. HQ provides the controlling player 4 additional CP for the battle. Shrine provides the general of the army a boost to their morale and fighting presence: they automatically pass all personal leadership tests and gain +1 to two characteristics of their choice from this list: WS, BS, Strength, or Toughness. The winner of the battle secures the planet.

Explore Scenarios: These clashes are smaller battles, and utilize the rules for Kill Team as advanced scouting parties come into contact with planet residents or other scout teams. The missions should be ones appropriate for exploration, with the narrative of who’s doing the exploring guiding the sides, roles, and terrain. The winner of the battle secures the planet.

Ship-board Raid: These clashes are initiated by players who have no other battles due to a maneuver phase when other players are battling. If there are more than one player with no other battles, they raid each other–the one with lower campaign points being the attacker boarding the defender’s ship. If there’s only one player doing a Ship-board raid, they can then choose their opponent out of anyone in the campaign. Use a Kill Team mission with the rules for ship board combat (and a ship map) for this scenario. As these ship raids have no planetary implications, instead the winner of a ship-board raid mission gets an intel advantage. If they were the attacker, they get to write their maneuver for the next round AFTER all other players have already revealed theirs. If they were the defender, the attacker was repulsed: that player must reveal their maneuver for the next round BEFORE all other players (as their failed energy on the assault limited their strategic options).

Wrap-up Phase: Check which planets each player controls. Reveal to that player which perk applies for that planet. During the first Round of the campaign, do not include the Faction Artifact options in the random Perk selection pool. Players can make note of the perks of planets as they discover them. Adjust player campaign points score according to their current possessions. Check to see if the campaign finale threshold is met. If so, then plan the mega battle campaign conclusion for the following week. If not, proceed to another Round of the campaign.

Below are the detail version images of the three systems within the cluster. 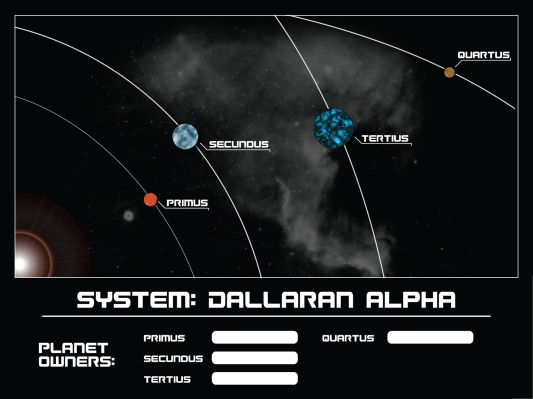 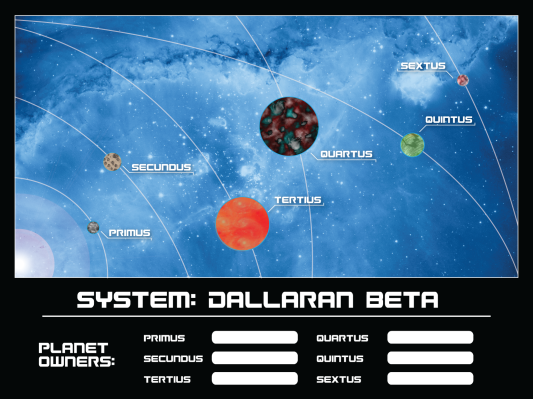 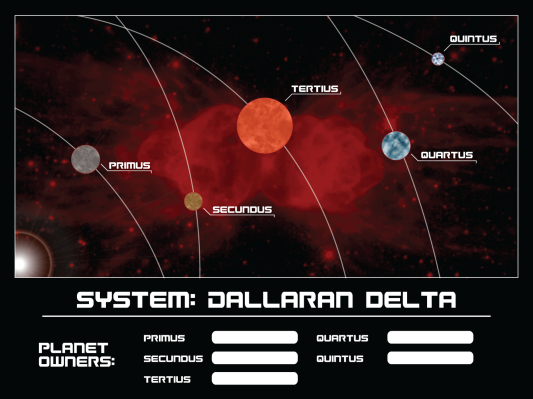 Each of the 15 planets in the cluster will be assigned a perk, but that perk will be distributed at random only as the planets are occupied. Players will know what they possess, and there may be reasons that it becomes visible to the other players–but there will be some mystery as no one will exactly know which planet provides what benefit. That will add some mystery in people’s quests to locate their faction artifact. To indicate this, upon drawing the card the name of the planet will be written in marker on the back of the playing card. Players will be able to then show opponents which planet they control, but without revealing directly what each planet contains.

Players each have a static campaign score that they carry throughout the campaign. Each Wrap-Up Phase players should check and adjust their current score.

Each player/side gains points as following:

Thus, player campaign scores can range from zero to 23 (the latter representing one player controlling every planet, having built their shrine world, and have a fully painted and based 300 point army).

At every Wrap-Up Phase, the players should add all of their scores together. When that score totals 27 or more, the Conclusion Condition is met.

Conclusion Condition Effects: There are no further rounds of play, instead a large culminating multi-player battle–the story for this battle will be determined by the breakdown of Campaign Points, planetary possessions, and the story that has developed across the Campaign’s play. Relative campaign points in particular will come into play in determining battlefield position and secret objectives for the final mission.