So the classic picture of the Genestealer Cults chaos army back from the Rouge Trader era is the one with the stylish cult limousines (see below). The current book is about to be replaced, but it’s unlikely that they’ll have a Limo option yet. The closest is the Goliath Truck, which is a light transport that can carry 10 models and sports just a pair of autocannons and a heavy stubber. But I’m not letting that stop me from adding the Limo to my army!

Enter: the Wargames Exclusive “Genetic Cult Civilian Limo”. The model is great, and for size comparison that oval base underneath it is a bit larger than the ones I use on my other Cult vehicles (it’s longer than the Flyer base). I loved painting up the model, and I’m really pleased with how it turned out. I’m still not convinced that Genestealer Cult is going to be a long-term force for me–but I’m having some fun with painting pieces now.

I also added another HQ choice for my force: an Abominant. He was fun to paint up too, as I like finding the point of going from the flesh tones to the Tyranid carapace colors on the model.

Anyhow, a bit more fun to the silly army with these additions. They certainly turn heads when they hit the table (two heads in the case of the Abominant hah). 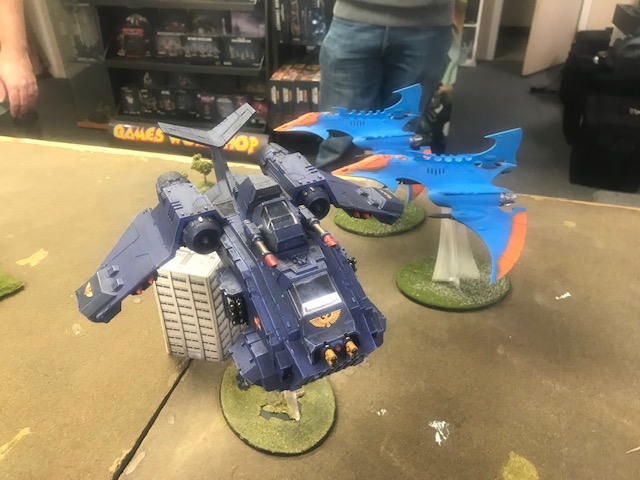 Well, TANKS-giving at Drawbridge Games (Pittsburgh, PA) was a great success, with ten players and almost 50 vehicles for a night of silly blasting-and-betraying fun. So we thought “Why not another?” And thus the idea for Dogfight December was born. Again, a chance to gather a group together, move some paired models around, have some fun, and win some prizes. This time with all the Flyers we have for our forces!

WHY: A motivation to paint flyers (and select skimmers) of all types for our 40k armies, and then to field them in one glorious free-for-all battle. Fun at the event, motivation for painting new things, and prizes for the winners are the reason we do these.

WHAT: Players will bring a flight team consisting of two painted Flyers (or selected skimmers) to compete for aerial supremacy. Each flight team will indicate a “Primary” and a “Wingman”, and players are strongly encouraged to come up with call signs for the pair. The goals of the game will be to rack the most confirmed kills while surviving as long as you can. If for some reason you can only field a single painted flyer, that’s fine–you just lost your Wingman in your tragic backstory! Models need to be painted to tabletop standard (the general 3 colors approach).

HOW: There will be a door prize raffle with some great 40k prizes as always for our big events. Everyone who shows up with a painted force of two flyers (or selected skimmers), gets one name entry. For each plane that you have shared in advance in built- or primed-only form (post on the Drawbridge Events page), and bring painted, you’ll get an extra ticket with your name in the prize drawing. The winners will get five extra tickets with their name in the drawing, including both competition victories as well as best painted Flight Team. As for the game, we’ll use the playing card system as often is the case with our big events: each round every player will be dealt a card that will determine turn order after turn one. Turn one is slightly different, as more expensive (by PL) flyer teams will have to enter the board first (in order), which will help balance out the advantage of having more capable vehicles. Finally, eliminated players will have a special way to affect the battle even when they’ve been shot down.

WHO: You! Entry is free for Drawbridge Gatecrasher Members (only $35 for the entire year, and includes 10% discount on all purchases for that year plus 20% on select pre-orders), and $5 for non-members.

SPECIAL RULES: Flight Teams use their formation to protect each other. Thus, when targeting in your shooting phase you simply indicate which other Flight Team(s) in range of your weapons you’re targeting. The “Wingman” of the pair is always hit and wounded first. Until they’re downed, the Primary does not take damage. Accordingly, Wingmen may choose to fly more defensively than their Primary partner. Each of their active turns they choose to fly more defensively, the Wingmen halve the number of shots and range of their weapons (rounding up). But if they do so, they get a 4+++ “Feel No Pain” style save against wounds (replaces rather than stacks with any similar rules they might have). When the Wingman plane has been eliminated, the Primary can itself choose to fly more defensively for the same benefit (and automatically gains this condition if its Wingman was shot down while using this mode, until the start of its next turn). Another special rule situation is Close Combat. Flyers without specific close combat weapons cannot choose to enter close combat with others. Flyers with close combat weapons in their profile can choose to charge in their turn as normal, but can only charge a single model (must choose the Wingman if they are present). The other model in the pair can automatically fire overwatch at the charging model to protect them. At the end of any close combat phases that happen, the attacked model is moved 1″ out of range of the attacker, and neither are counted as “in combat” (so can move away, shoot, or be shot at as normal).

So what can you bring? The list below has everything that we’re permitting. If something is missing let me know and we can talk about adding it (almost all Lord of War Flyers are not allowed, along with sort of “super heavy” choices).

Note that models that have drones or spore mines or bombs can use those models and rules as part of this event. Any additional models placed do not count toward surviving until the end, but can give the player additional things to do in their turns.

As always, potential players can direct any questions about the event to me or Drawbridge’s owner Enrico on social media.

When a player is eliminated, they can still affect their opponents on their phase. After each round of activations is done, all eliminated players get to indicate a single model each that takes d3 mortal wounds (can shrug as normal if they have that rule or are flying defensively). This represents various flak, stray shots, and defensive grids. 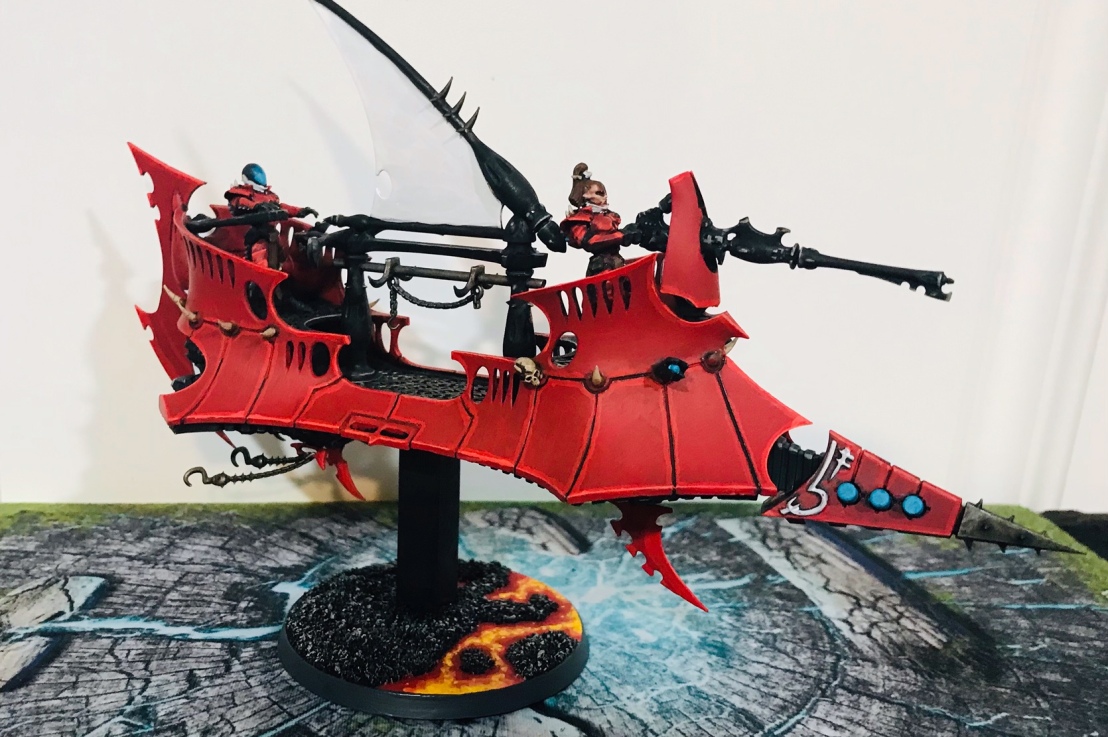 So this past week the TANKS-giving mega battle game that I ran happened in our local gaming store, Drawbridge Games in Pittsburgh, PA, USA. Was a great time and I think people had a lot of fun: we had 11 players show up with all sorts of armored forces represented. However, on a sort of absurd whim–coupled with a healthy dose of already tiring of painting construction vehicles–I grabbed a couple of Drukhari vehicles and painted them up, starting with the Combat Patrol. I really enjoyed painting them, to the point I grabbed another Combat Patrol and a couple of other items for the army. So despite all the other “starts” recently (/sigh), count this as another start. Not sure how far it will go (for reasons below). But has been a fun bit of a distraction.

The worse part is that I’ve done Eldar before. I had a huge Craftworlds and Harlequins force years and years ago. I painted it in Iyanden color scheme, and it was one of the first armies I was really proud of and completed a whole lot of. I ended up selling it as I moved on to other projects (a common theme of my hobbying). And I sort of vowed “never again”.

That represents a lot of painting and time, so since I sold it I definitely was hesitant to ever dip into the elf pool again. And yet, on a whim for TANKS-giving, painted up a few pieces.

A Venom light transport (above) and a Raider larger transport (below), both in the color scheme that will work for both Drukhari and the potential of expanding into Saim-Hann Craftworlds and Ynnari both easy enough. When I was deep into all the yellow of Iyanden in that long-ago army, I consistently wished that I had chosen the Saim-Hann with their smooth red look.

I also got two Ravagers done to tabletop quality for the event, but I still need to put some highlights and finishing touches on them, so I’ll save those photos for the next update. I did however get so inspired by the progress that I completed a Drukhari Archon as well.

So was this a mistake? Maybe so… It certainly represents yet another force I’m starting rather than expanding an existing force. But I’m excited and had fun painting them, so that’s a strong positive start at least. Also, this brings me to 330 PL painted for the year. I’m 36 points away from my final goal of painting 366 Power points of 40k for the year of 2021–the first time I will have met the goal I set for myself for the Brush Wielder’s Union. If I take this Drukhari force up to 50 PL I’ll hit that mark almost exactly. I think I can do it. 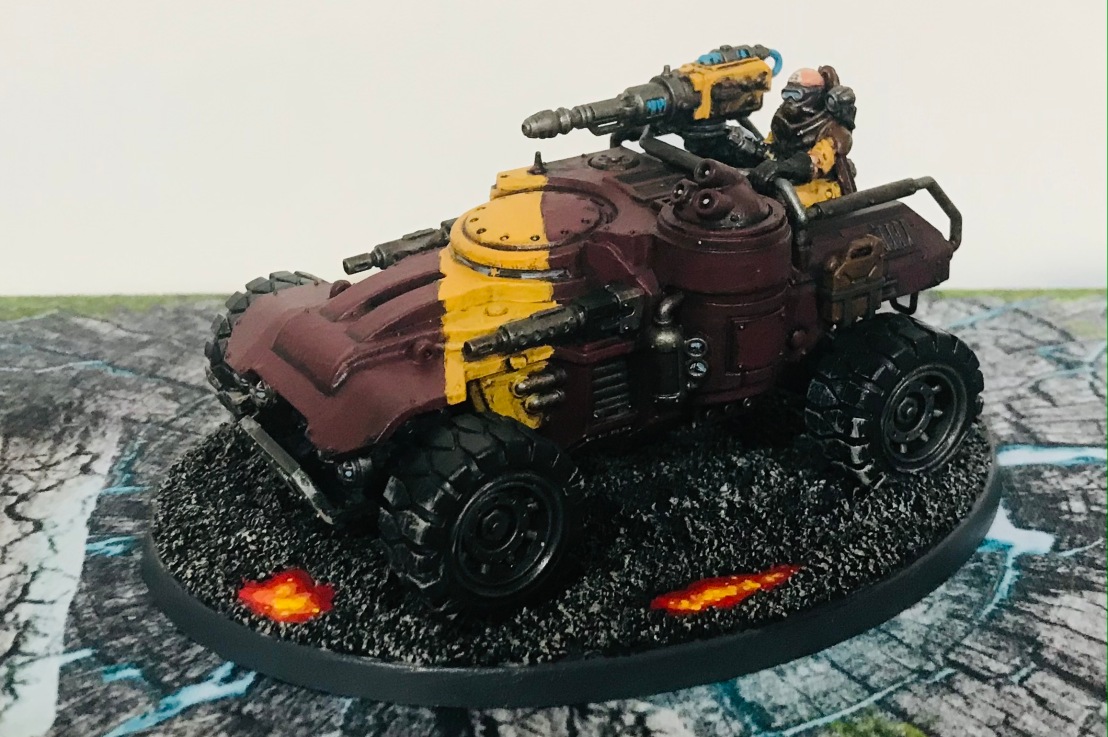 More work these past three weeks on the Genestealer Cult, which resulted in me reaching 25 PL of models fully painted (provided I use a unit of general Cultists I had painted before as a Brood Brother Squad). That let me get in a paired game of Kill Team with 40k against my friend Colton’s Salamanders. It was a burning flaming loss for the Genecult, but still was good to get the first one in. It’s been fun exploring the models and paint at least.

I’ve completed a Sanctus, a Goliath Rockgrinder, and my first Achilles Ridgerunner. Pics below. I’m doing all my vehicles with the stripe of the opposite cult color. Construction vehicles will be in yellow (burgundy stripe), while other vehicles will be burgundy (with yellow stripe).

The Rockgrinder! I’m uncertain about the yellow “construction vehicle” coloring tho.

Also, and unrelated to Genestealer Cult, I did also finish up three Necron Wraiths that I’ve had sitting on my painting table for too long.